When uterine fibroids were treated with the selective progesterone-receptor modulator ulipristal acetate, rates of amenorrhea, defined as no menstrual bleeding for 35 consecutive days, increased, according to results from the first American trial of the drug.

Ulipristal acetate was more effective than placebo in terms of "rate of amenorrhea, time to amenorrhea, and quality of life," said James Simon, MD, clinical professor of obstetrics and gynecology at the George Washington University School of Medicine in Washington, DC.

Results from the VENUS-1 trial were presented here at the American Society for Reproductive Medicine 2016 Scientific Congress.​​

These findings are "consistent with European data," said Jacques Donnez MD, PhD, professor emeritus at the Catholic University of Louvain in Brussels, Belgium, and director of the Society for Research Into Infertility, who headed the European trials of the drug.

Ulipristal acetate is approved and marketed for the treatment of uterine fibroids in Europe (Esmya, Allergan), but not in the United States.

The European studies and VENUS-1 "prove we can significantly reduce bleeding with this medication," Dr Donnez told Medscape Medical News.

Overall, rates of amenorrhea in VENUS-1 were markedly lower than those seen in the four European PEARL trials, but Dr Donnez and Dr Simon agree that the comparison is not really fair.

"It's very difficult to compare a US-based population with a European one," Dr Simon explained. "The American women were much heavier and had, by and large, much worse fibroids, both in terms of size and number."

The randomized, placebo-controlled, double-blind VENUS-1 trial involved 157 women 18 to 50 years of age with at least one fibroid and excessive prolonged bleeding.

Mean menstrual blood loss was around 200 mL per cycle, mean fibroid volumes were around 59 to 83 cc, and uterine volumes were just over 300 cc.

There was a "highly statistically significant difference, even after adjustment for multiple comparisons.

In terms of adverse effects, ulipristal acetate was "extremely well tolerated," he reported. "There were no deaths or treatment-related serious adverse events or discontinuations, no malignant changes, and endometrial changes appeared to be reversible with discontinuation." 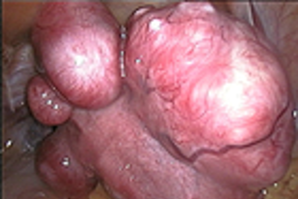